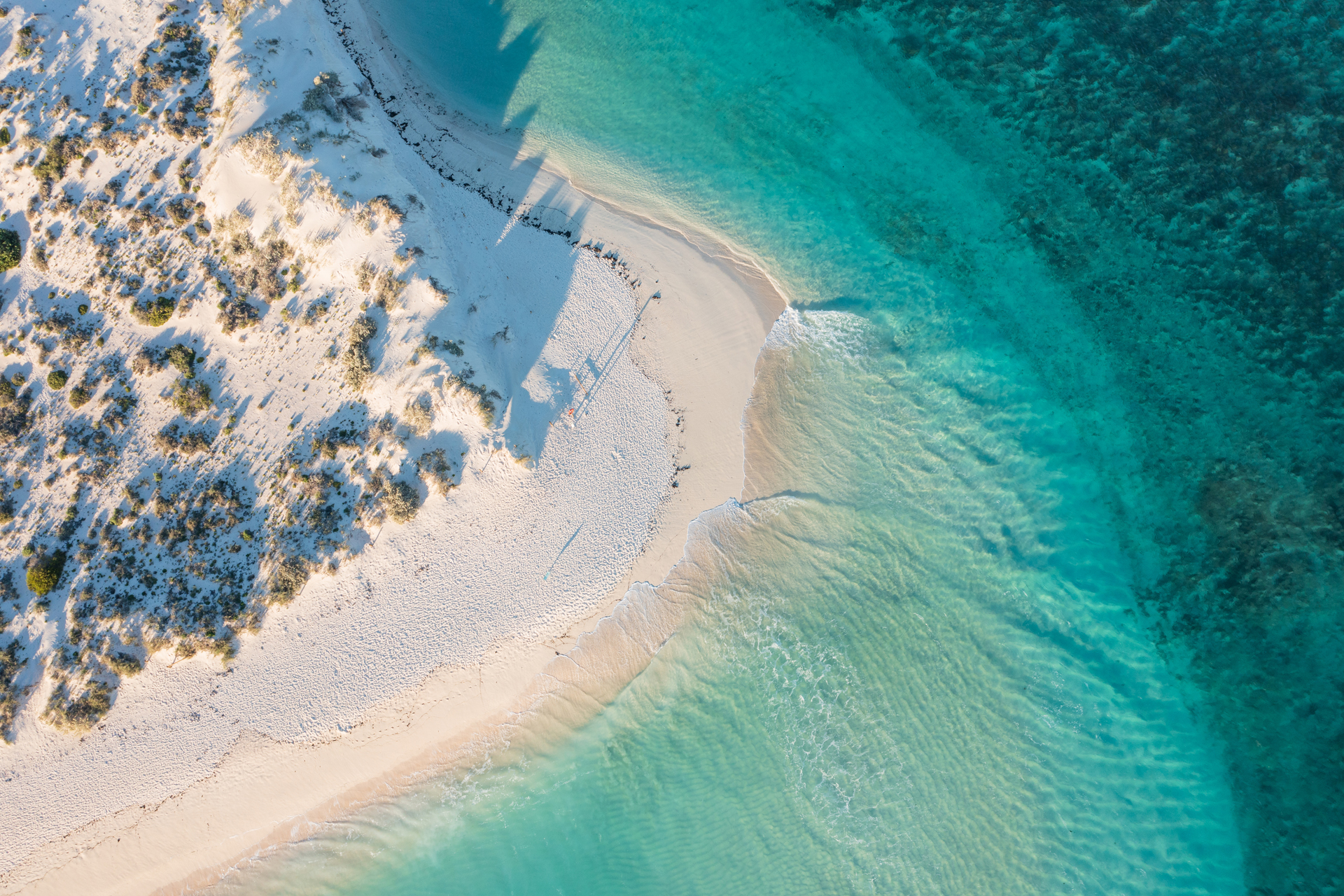 There are many reasons to visit Exmouth in Western Australia. The area’s unbelievable natural beauty is one of the biggest drawcards when it comes to attracting locals and tourists. With 50 km of pristine beaches to explore – all magnificent in their own right – if you’re looking for the most beautiful beaches in Australia (we’d even go so far as to say the whole world!), we guarantee you won’t be disappointed.

Close to Exmouth, Cape Range National Park is the main entry to the Ningaloo Marine Park and home to the whitest of white sand beaches. Not to toot our own horn, but it’s one of the best national parks in the country, never mind the west coast. Here you can swim, snorkel, sunbathe, and explore deserted beaches to your heart’s content. It’s a paradise for beach lovers, and the waters of Ningaloo Marine Park – WA’s answer to the Great Barrier Reef – are just as magical and mesmerising as they appear on Instagram.

If the idea of walking barefoot on whiter than white sand and swimming in crystal clear turquoise water makes your soul happy, read on as we reveal our top 4 must-visit beaches in Cape Range National Park.

With the most pristine stretch of white sand, tranquil Turquoise Bay is one of Western Australia’s most iconic beaches. It’s probably the most famous beach in Cape Range National Park and is frequently named one of the Top 10 Beaches in Australia. Thanks to its beautiful blue, calm and inviting water, Turquoise Bay certainly lives up to its name.

Turquoise Bay is a favourite beach for both tourists and locals. So because of its popularity, it can get busy at times, especially in peak season. Here you can swim amongst the coral reef and marvel at the abundant sea life, including stingrays, turtles and a multitude of colourful fish. Take the opportunity to snorkel the waters of the World heritage-listed Ningaloo Reef, the world’s largest fringing reef. Look out for angelfish and pufferfish.

You’ll find Turquoise Bay some 60 km south of Exmouth. Parking can sometimes be an issue at peak times. So try to get there early to find a park.

Sandy Bay isn’t as famous as Turquoise Bay, which means it usually attracts less of a crowd. Nonetheless, it’s equally as beautiful. Located on the coastal side of Cape Range National Park, Sandy Bay might not get the attention Turquoise Bay does. But that doesn’t mean it doesn’t deserve it. If you’re looking for paradise, this beautiful spot away from the crowds is it.

Just like Turquoise Bay, you’ll be captivated by a breathtaking bay of white sand and crystal clear water. It’s also another great spot for a swim and a snorkel. The current isn’t quite as strong as Turquoise Bay, and its shallow waters make it ideal for families with young children. On windy days Sandy Bay is a popular spot for kitesurfing and windsurfing. And if you enjoy beach fishing, it’s one of the best spots in the area to throw in a line.

Osprey Bay is located on the western side of Exmouth and is around an 80 km drive from the town. Situated above a rock-shelf shoreline, you will find Osprey Bay adjacent to the Osprey Sanctuary Zone in the Ningaloo Marine Park. It is a small beach with a walking trail that connects Osprey Bay to Sandy Bay.

Often referred to as the aquarium by locals, Osprey Bay is another excellent spot to explore the underwater world. Swimming is safe for all the family. Remember to bring your snorkel because the waters are teeming with colourful coral and marine life about 100 metres offshore. If you’re into fishing, recreational fishers can fish from the shore here.

At Lakeside Beach, you’ll find one of the most incredible snorkelling spots in and around Exmouth. The whole area is home to world-class snorkelling sites, but this is one of our favourites. It’s a sheltered and calm beach, ideal for swimmers of moderate capability because it’s an all-tide snorkel spot. Spectacular coral formations lie some 100 metres from the shore, between the shore markers and yellow buoys. It’s not uncommon to see reef sharks at Lakeside, as well as the usual stingrays and turtles.

Of course, there’s so much more to see and do in Exmouth – it’s not all about our world-class beaches! Read more about our favourite things to do in Exmouth and make it one of your New Year’s resolutions to visit Exmouth in 2022.

Top Tips Before You Go

You will need a National Park Pass to enter Cape Range National Park. Passes can be bought online or from a range of outlets, including entry stations and the visitor centre.

Are you visiting during the winter months? The water can be a bit colder. So it’s a good idea to bring a wet suit with you.

The majority of roads and tracks are accessible with conventional vehicles. But to cross Yardie Creek, you will need a 4WD. You have to access most of the beaches in the national park via unsealed roads.

From December to February, temperatures in the area can often reach 40°C. In the winter months, June to August, the average maximum temperature is 25°C. Just something to consider when planning your trip.

If you’re driving from Perth to Exmouth and need somewhere to stay, we have a range of accommodation options to suit all travellers and all budgets. Our Exmouth accommodation options include self-contained chalets, luxury spa chalets and park homes, as well as camping and caravan sites. Check availability and book your stay.